5 years ago on Valentine’s Day, Blair popped the question that would change our lives. Lucky for him, I said yes and the rest is history. It is nice every year to reflect back on that special evening. I remember having an in-service at work and being in a miserable mood. I was dreading the long drive to CT after work, but looking forward to spending 4 days with my man. When I arrived, I was pretty distraught from the ride, starving, and I distinctly remember having the world’s largest pimple on my face. I felt ugly. Little did I know what was in store.

In my frazzled state, I turned the key to the apartment to see Blair completely relaxed waiting for my arrival. We had dinner plans that I quickly got ready for. We had tried a new restaurant down the street, which was good, but the service was horrible. Looking back on the evening, I can’t believe how calm Blair was sitting there. We waited forever for each course.

We headed back to the apartment to exchange gifts. I opened the hand-made card that he made for me and he asked me to read it to me. Before I knew it, he was getting down on one knee, babbling something in French, and asking me to marry him. After some screaming, crying, and that one special word, I proceeded to make him do it over again because I had “blacked out.”

Valentine’s Day is special to us and even though many people see it as a Hallmark holiday, I like to make a big deal of it. Unfortunately, I have a class for work this year, but these lava cakes will make an appearance on whatever night we celebrate. Obviously, they have already made one appearance already and it was heavenly. I already have a chocolate lava cake recipe on the blog, but this is perfect since it makes exactly two. One for yourself and one for your sweetheart. Heck, if I were single, I would make them and eat both of them, they are that good. Topped off with some vanilla ice cream, they make the perfect chocolate dessert. 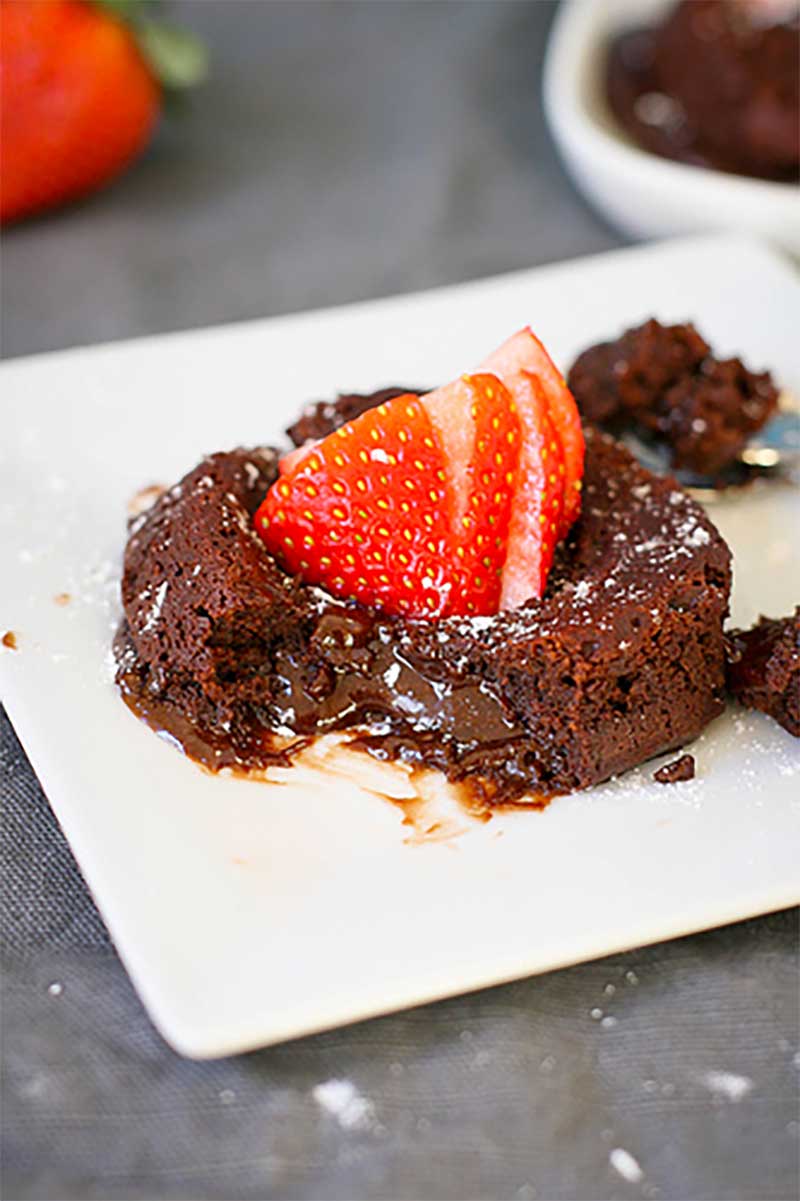 Preheat the oven to 400 degrees and adjust the oven rack to the middle. Butter two 6 ounce ramekins and coat with cocoa powder. Set aside.

Combine the butter and chocolate in a medium microwave-safe bowl, and microwave on high in 30-second intervals, stirring after each until fully melted. Stir in vanilla into melted chocolate.

In the bowl of a stand mixer, fitted with the whisk attachment, whip the egg on medium-low speed until foamy, about 1 minute. Increase speed to medium-high and whip the egg for an additional minute. Slowly add the granulated sugar and salt, continue to whip the egg until it is very thick, and pale yellow in color, about 7 minutes longer.

Pour the egg mixture over the chocolate mixture, then sift the flour over the top. Gently fold the mixture together with a rubber spatula, until just incorporated. Divide the batter among the prepared ramekins. Place the ramekins on a rimmed baking sheet and bake the cakes for about 10 minutes. They should puff slightly above the sides and the middle will still be jiggly.

To un-mold: Run a small knife carefully around the edges of the cakes. Invert each ramekin onto the individual serving plate and let sit until the cakes release themselves, about 1 minute. Dust with confectioners sugar and serve immediately.