When I was pregnant with my first child, a friend’s dad told me “congratulations, you’ll never sleep again.” I laughed, and naively thought that my kid would be different.

Two kids later and sleep ranks up there with potty training as one of the toughest aspects of parenting. Nobody seems to get enough, and the struggle is daily.

Early To Bed Is Best For Everyone Involved

But a study confirms why all those bedtime battles are indeed worth it. When kids go to bed early, they are healthier and mom is happier.

This may seem like common sense, but science has confirmed its truth with the Growing Up in Australia study, during which researchers tracked thousands of families beginning in 2004. Every two years, these families took part in a series of interviews that allowed researchers to check in on the state of their physical and mental health.

Analyzing the sleep and lifestyle data they collected, researchers found that children with early bedtimes—those asleep by 8:30 p.m.—had “better health-related quality of life.” And their moms had improved mental health, too.

Jon Quach, the lead author of the study, spoke to Today about the findings. “So mums and dads, getting kids to bed early is not just great for them. It’s good for you, too,” he said.

Makes sense to me. There’s nothing quite as sweet as the silence that falls on my house shortly after 8 p.m. That evening quiet time is a gift. A space in the day to recharge, relax and watch “The Bachelor” in peace.

Having kids is a mental and physical feat. When you add the mental load of jobs, marriage, home maintenance and some semblance of self-care to the list, it’s no wonder parents have some excess stress and fatigue in their lives.

Kids Who Go To Bed Earlier Tend To Sleep Longer

In addition to happy mommies, there are some real benefits to children as well. A U.S. poll featured on the National Institutes of Health website suggests that children who go to bed earlier also sleep longer.

And kids need a lot of sleep. Just look at this chart from the National Sleep Foundation, which shows the recommended number of hours of sleep kids should get each night: 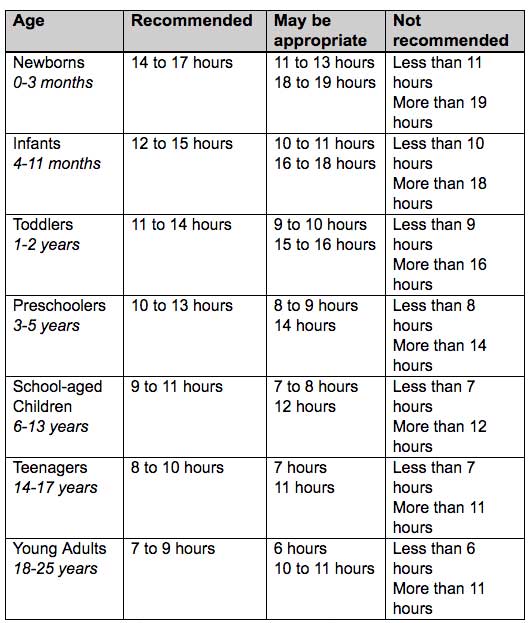 What Can We Do To Get Our Kids To Bed Earlier?

First of all, researchers say we need to limit before-bed screen time. According to the National Sleep Foundation, the blue light emitted from screens can delay the release of sleep-inducing melatonin, increase alertness and reset the body’s internal clock to a later schedule. Yikes!

To be safe, they recommend a digital curfew that would limit the use of TV, tablets, phones and computers one to two hours before bedtime.

The National Sleep Foundation also recommends a consistent bedtime routine. In our house, this includes a soothing bath and a good book. But whatever you choose to incorporate into your bedtime routine, know that a regular routine can set you and your child up for success. And this can start as early as infancy, so the sooner you can establish a routine, the better!

Other helpful hints for a good night’s sleep include ensuring your kids get plenty of exercise during the day, avoiding caffeine and keeping their rooms dark.